It is with a heavy sad heart I have to tell that Grand Ch Beadale My Rebeca E.T went over the rainbow bridge running free with mom today.

Becky was such a grand Schipperke so sound and produced some of the best Schipperkes in Austraila and over seas with soundness and quality, just to name same of them.
MULTI BIS WINNER SUPREME CH BEADALE SIR LANCALOT
Japanese, International CH BEADALE SEA STORM.
And her Daughter GRAND CH BEADALE TIA MARIA . To be the only cream GRAND CHAMPION in the WORLD!!

And also in her Grand kids such as MULTI BIS WINNER SUPREME CH BEADALE YOU SON OVA GUN.

Dancer proved herself in the ring with Runner Up to Best In Show awards, Class In Show awards and Best In Group awards, plus many Royal show Best of Breeds over the years.

Those at the 2010 Schipperke Club of Vic. Championship Show had the honour of seeing Dancer at her last show in the veteran’s class, still a beautiful as ever! And those who had the pleasure of handling her in the ring over the years could always present a stunning dog to the judge. A beautiful girl, affectionate and loving, a credit to her breed!

We are so proud of this little Schipperke, she has been a lovely ambassador to the breed. RIP Dear little girl!

Owned and loved by Lyn and Barry of Beadale Schipperkes 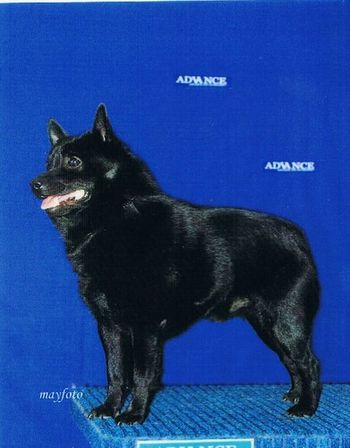 It is with great regret that I announce the passing of Grand Ch Beadale Mr. Beau Jangles bred by Lynette Niemann and owned and loved by Dorothy Hall Cadvarni Kns Brisbane Dorothy didn't put her results up on Dogsonline but Boy was a Multie BIS and Multie in show award winning dog well known to the Qld and Northern NSW Show Scene and he was responsible for me showing Beadale Schipperkes as it was love at first sight when I first saw him. I am proud to own his gold son Aust Ch Cadvarni Golden Bear. RIP sweet Boy you will live on in your champion offsprings.